For years, Austin has had the reputation of being a bicycle-friendly town, but for those of us who have lived here for 15-20 years or more, hearing or seeing this in magazines like 'Bicycling' has always been confusing. Yes, there are oodles of mountain bike trails, and yes, Lance Armstrong made his name here; however, if you attempted to bicycle in and around the city on streets and roads, you literally placed your life on the line. Not only were there virtually no bike lanes, but it was legal to park a car in those that did exist. And the newspaper regularly ran articles about drivers who intentionally clipped bicyclists because they felt that they were infringing on the god-given rights of Texans to drive their cars, trucks, and SUVs with no impediment. This is not an exaggeration!

However, in the last 2-3 years, I've begun to see more and more dedicated bike lanes appearing on major streets throughout the city. There are even pedestrian crossing lights on major thoroughfares, including one that allows folks to cross from one side of Zilker Park to the other– no more embarrassing scenes of families gathering at the side of Barton Springs Rd, and then making a mad dash across, with cars zooming by from both directions! 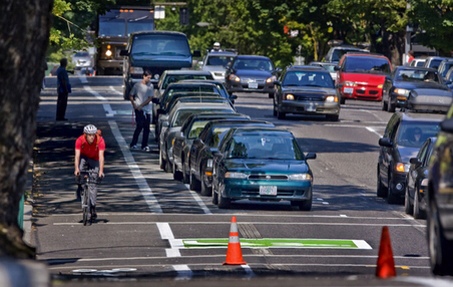 I don't have any concrete evidence that Austin drivers have moderated their hostility toward bicyclists and pedestrians, but I have to believe that over time, this, too, will change. Thanks are due the folks who have pushed for these changes– it appeared to be a Quixotic errand for many years, but the fruits of this quest are finally beginning to appear. As Austin continues to grow like wildfire, the hopes for a livable city rest on this continuing evolution.

Some good friends of ours are moving to Austin from NYC; they’re lifetime New Yorkers, but have decided that they want their kids (6 and 10) to grow up in a place with a bit more green space around, and since the father can work from any location, they’ve been exploring various parts of the country, including Austin. They finally settled on Austin, and came down this week to sign a lease. They want to rent initially, and they’ve been working with an excellent real estate agent, who provided them with a list of potential properties to check out (she was out of town for the Easter weekend).

The agent was given a specific price for one of the rental properties, but when the mother arrived at the property, the woman quoted a price more than $1000.00 higher than she had quoted to the real estate agent. When our friend asked why the price was so much higher than what the real estate agent had quote, the woman claimed that the price fluctuated from day to day, depending on the market.

Okay, so we’re talking a fluctuation of close to 100% on the monthly lease for a rental property. Given the current state of the housing market, this is pretty much impossible; if anything, prices are going down, not up. Consider, as well, that this conversation took place on Good Friday; I don’t really follow the stock market that closely, but even I know that the markets were closed on Friday. So clearly, there’s no good explanation for this “fluctuation,” other than redlining.

If you haven’t guessed already, our friends from NYC are black. When my wife and the mother were discussing this particular incident, neither of them specifically mentioned the elephant in the room, and I’m guessing that speaking its name would have been an embarrassment for our friend, but really, the embarrassment is a collective embarrassment for all of us, you and me, everyone in this country that just elected its first person of color as President. I would like to have thought that the fact of this election represented a fundamental shift in the strategy by which we as a nation deal with our “original sin,” and certainly some things have changed, but if people want to claim that racism no longer plays a big role in the rights of individuals to life, liberty, and the pursuit of happiness, I call bullshit.

SXSW draws to a close

Frankly, I haven’t paid much attention to SXSW in recent years, as the demands of parenting and providing have diverted my attention from the independent music scene. About the best I can do is follow a couple music blogs (Tsururadio, Aquarium Drunkard, Motel de Moka) to get a taste of what’s out there.

This year, however, a project I’m involved in (The Victor Mourning) performed not once, but twice, during the festival, so I did get a bit of a taste of the festivities. Our second performance was a very brief 25-minute set at the Saturday Yard Dog Party; we preceded one of the idols of my college days, Jad Fair, who, along with his brother, David, formed the legendary band Half Japanese, which I guess makes both of them one quarter Japanese? Here’s a pic of Jad from his set:

His cord shorted out very early in his set, so being the consummate showman that he is, he proceeded to play unplugged in the midst of the audience– worked pretty well for him, despite the fact that an unamplified non-hollowbody electric guitar sounds a bit like the rubber-band guitars that we built in our 3rd grade art class, but he is Jad Fair, after all. So, quite an honor in my book (although I’m sure it wasn’t intended as such).

In a bizarre footnote, my ex-wife walked into the performance area about halfway through our first song (she was there to see Jad, not us). I hadn’t seen her in about 6 years, and considering that my actual wife was in the audience, too, it made for an interesting experience 😉

Posted in Austin, Spectacle, The Unexpected

Don’t mourn for The Victor Mourning

We made it into the February issue of Budget Travel, in an article entitled ’25 Reasons We Love Austin:’

Wish I could say that we were one of the 25 Reasons, but in fact #19 is Yard Dog, the gallery where we’re playing in the picture linked above.

Posted in Austin, The Unexpected

Looks like Ike is headed our way; it’s unlikely we’ll see anything very serious in Austin, but it will be nice to get some rain. Here’s hoping that folks closer to the action come through okay!

Update: The latest 3-day forecast shows Ike veering to the east, so we might not see much of anything here in Austin– onward with the drought. Dang it.

Posted in Austin, The Unexpected

Ran The Human Race in Austin a few hours ago. Official time of 59:18, which is a far cry from what I ran in the Capitol 10,000 ten years ago, but not bad for an old man. Yes, yes– big corporate-sponsored to-do, but a big portion of the proceeds went to various charities (I directed my contribution to the UN Refugee Fund), and it was a pretty extraordinary experience. At one point, the course went up a series of hills, and the runners ahead of me formed a huge, bobbing river of red (due to the official race uniforms)– it was quite beautiful, and I only wish I could have enjoyed it a bit more, but with temps in the mid-90s, I had to keep my focus on the task at hand. Good stuff!